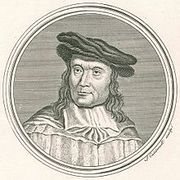 William Child received his Musical Education from Elway Bevin; he was Organist of St. George's Chapel, Windsor, and of the Royal Chapels, in the Reigns of King Charles the First, King Charles the Second, King James the Second, and King William and Queen Mary; he was also one of the King's Band of Musicians. He was admitted Batchelor in Music at Oxford, July 8th, 1631, and created Doctor in the same University, 1663. He was buried in St. George's Chapel, Windsor.

Here lies the Body of William Child, Doctor in Music, one of the Organists at the Chapel Royal at Whitehall, and of his Majesty's Free Chapel at Windsor 65 Years. He was Born in Bristol, and died here the 23d of March, 1696-7, in the 91st Year of his Age. He paved the Body of the Choir.

Go happy Soul, and in the seats above,
Sing endless Hymns of thy great Maker's Love;
How fit in heavenly Songs to bear thy part;
Before well practic'd in the Sacred Art.
Whilst hearing us, sometimes the Choire divine
Will sure descend, and in our Confort join;
So much the Musick, thou to us hast given,
Has made our Earth to represent their Heaven.

He gave Twenty Pounds towards building the Town-Hall at Windsor, and Fifty Pounds to the Corporation, to be disposed of in Charitable Uses, at their Discretion.