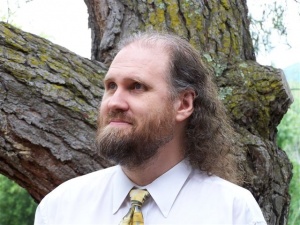 Translations by this editor:

e-mail: myname (without a space) at hotmail.com

I am a longtime Sibelius user (recently switching to ver. 7) and have done professional work for Laureate Press. I'm also available for translation from French or German into English. My most recent gig, for a Corporate Council magazine reporter, was some Süddeutsche Zeitung reporting on the shocking pharmacological tests in Kano and resulting lawsuits, but I'm even quicker with musicological jargon.

Richard Mix (bass) appears with over a dozen Bay Area opera companies singing a repertoire that embraces Wagner and Monteverdi as well as Scelsi and Stockhausen. A former cellist, he made his singing debut as Truelove in Berkeley Contemporary Opera's 1992 production of The Rake's Progress and went on to the Darmstädter Sommerferienkurse für neue Musik, where he was awarded a Patenring grant and re-invited in 1994 and 1996. West coast premieres range from Arthur in Maxwell Davis' The Lighthouse to C.P.E. Bach’s 1789 Matthaeuspassion. Last year saw Julius Eastman's Prelude to the Holy Presence of Joan of Arc at the Berkeley Art Museum and the stage premiere of Vladimir in Butterfly Country (Nov. 16), whose Nabokovian title role was written for him by his wife, Ann Callaway. He is currently looking forward to Wotan in Die Walküre (Nov. 16 & 23 at Vallejo's Bay Terrace Theatre). He directs Bella Musica (Dec. 8 concert to feature Lasso's Prophetiae Sibylarum and short works of Barber, Callaway, Rautavaara & Tavener) and the choirs at St. David of Wales Church in Richmond (Dec. 7 Sing-along Messiah with period instrument orchestra).

I love to read music one-voice-per-part! User:Richard Mix/Library is a list of things I have ready copies for.

Among my CPDL hobbies are:

I'm gathering thoughts for various projects that should in time feed back into CPDL editing at these pages: