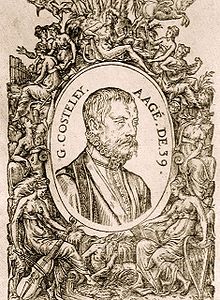 frontispiece of the 1570 print

Aliases: Guillaume Coteley; Guillaume Cauteley – The spellings Coteley & Cauteley suggest the pronunciation of his last name. His first name is occasionally and probably erroneously given as William.

Biography: Costeley's birth date is inferred from the portrait "in his 39th year" in the 1570 print of his Musique although this of course does not rule out an earlier date. In spite of a contemporary biographer giving Fontanges-en-Auvergne as his birthplace, there have been more or less fanciful attempts to claim him for Scotland or Ireland. His work began to be included in Parisian anthologies from 1554 and by 1560 he had been appointed organist and valet de chambre to Charles XI. Costeley settled in Normandy soon after the appearance of his 1570 collected works and no later compositions are known.