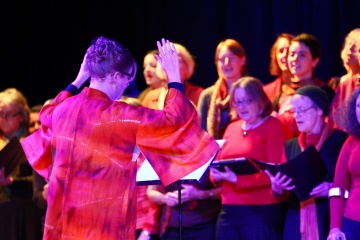 Sarah Lambert is a singer, songwriter, choir leader, conductor and arranger who worked in Wollongong, Australia (an hour south of Sydney) for 15 years before moving to Melbourne. She directed the Sapphire Lounge Singers (Wollongong) for 7 years before taking a break and then re-launched her community choir work as the inaugural Music Director of the Berkeley Songbirds in 2011 (women's choir, health and community development focus). She also took up the Music Director role for the Illawarra Union Singers in late 2010, focusing on musical development that led to the expansion of the group and their attendance at music festivals as well as rallies and fundraisers. Along with the Directors of the Sydney and Newcastle Trades Union choirs, she co-directed the combined Union Choirs concert for 3 consecutive years at the Illawarra Folk Festival, as well as performing in other smaller ensembles.

A specialist in teaching untrained adults to sing with joy and good technique, she also organised and conducted many mass commmunity choir events. During her Wollongong period, she was known for taking a collaborative approach and developed/directed many community-based mass pop-up event choirs including refugee fundraisers involving multiple choirs and musicians.

A regular blues and jazz soloist, she also performed as mezzo-soprano in the award-winning contemporary classical chamber group Eklektika (under the directorship of Judy Stubbs) from 2004-2014. In 2007-8 she wrote an album of original material and was selected to record a song professionally as part of an auditioned singer-songwriter development program. In 2014 she studied for a Specialist Certificate in Voice and Musicianship with Berklee College, Boston and also began private vocal teaching for adults. Along with Janet Andrews (Conservatorium of Music, Wollongong) she co-led the Festival Choir at the Illawarra Folk Festival in 2017 and was soloist on the song dedicated to Esme Radzipova (the Queen of the Gypsies) in the finale concert.

In 2016 she moved to Melbourne to take up an opportunity to study a PhD full-time with a scholarship from Deakin university. She is currently working on the PhD about free online learning for non-privileged learners including mature-age women. 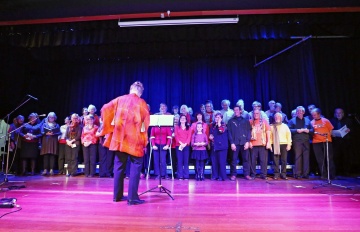 Sarah Lambert conceived of a mass community choir for the finale to a fundraising concert called "Boundless Plains", in aid of refugees. Here is the choir on-stage at the City Diggers Club, Owen Room, Wollongong. June 2014. Image courtesy of www.mostafaphotography.net