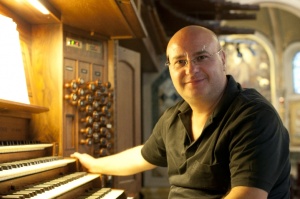 Organist, Titular organist of the most prestigious organ in Italy, the four-keyboard mechanical organ made by the Zanin company and located in the St. Rita’s Sanctuary in Turin, Artistic Director of the St. Rita’s International Organ Festival, one of the most important and longevous in Italy, in 1993 Omar Caputi had already distinguished himself in the organ music world with the transcriptions of the Brandenburg Concertos No. 3 and Johann Sebastian Bach’s No. 6 (the first in the world to have realized a similar work) performed by his teacher Massimo Nosetti in Paris (Saint Eustache), Los Angeles (Crystal Cathedral), Magdeburg (Germany) even before their recording and score publications took place in 2000 by the same author.

Subsequently other transcriptions such as the “Concerti Grossi” by G. F. Händel and different compositions for choir and organ and organ solos such as the very recent and much appreciated Toccata on the theme of "Dies Irae" presented at 2012 at the St. Rita’s International Festival in Turin. In 1998 he made his debut as a composer at Rome in St Ignazio’s church and in St Peter’s Basilica in Vatican with “Alleluia per la festa di Pentecoste” (Alleluia for the Penticost feast) also published for choir and organ receiving considerable appreciations. Recently this work was performed at the St. Rita’s Sanctuary by the Lehigh University Choral Arts with a choral formation of over one hundred and twenty members. O. Caputi completed his studies at Massimo Nosetti’s school, unanimously recognized among one of the greatest figures of the Italian organist world of the '900.

He brilliantly finished his studies at the "G. F. Ghedini" Conservatory of Cuneo, Caputi continued his journey in improving his knowledge of ancient, French, romantic and modern music, attending numerous master classes held by masters such as René Saorgin, Daniel Roth and Lionel Rogg. Also after the completion of his artistic training he attended a musical analysis course with Marcel Bitsch, prestigious French composer, and a three-year Gregorian Chant course in the city of Chieri, held by father Luigi Mulatero. An eclectic musician, Omar Caputi has a very respectable artistic musical repertoire ranging from ancient to present day music and this has allowed him to hold concerts as an organist, harpsichordist and choir director, both as a soloist and together with other musicians and his attention and artistic research has led him to hold unique concerts in the European music scenes with organ works of the highest virtuosic levels. There are many of his prime complete executions.

As an international concert artist, he has performed concerts in France, Switzerland (International Festival of Montreux), Germany (International Festival of Landsberg), Canada, California (Cathedral of Los Angeles), in 2007, together with the Turin’s City Municipal Police Band, under the direction of F. Bar, he performed for the first time in Europe in a memorable concert, "The Fenlands", an original organ and Symphonic Band composition by the great English musician Arthur Wills who personally congratulated the great execution. This concert is a unique representation nationwide and the second performance in history at a European-level. This event is published in a live version on the master's youtube channel. In 2013, again as a first European execution, in collaboration with Ercole Ceretta, conductor and trumpet soloist, he realized a special album to present the compositions of the Norwegian master Kjell M. Karlsen composed for organ, brass band and percussion, receiving notable appreciations.

Also in the organ-choral field his commitment is constant having realized, under the direction of M. Nosetti, the performances of important works such as the Requiem of Maurice Durufle (also performed with the OFT and the Italian Youth Choir), the great Messe Solennelle by Louis Vierne (also performed in the Brussels cathedral with two choirs including 80 members) and the Mass of Camille Saint-Saëns. He is also an organ professor in various Piedmont schools he carries out his intense artistic activity as organist, director, harpsichordist and composer. To his credit Caputi has several recordings that are unique in all the world, such as an album containing the “Concertos of J S Bach” recorded by Syrius (the world's first ever and only disc with a highly virtuosic program) and a disk with organ music and brass band by Kjell M. Karlsen (one of the most complex discs produced, given the complexity of the pieces).

The great K. M. Karlsen in homage to master Caputi and in sign of a great consolidated friendship, has composed a Fantasy on the theme of the praise to St. Rita composed by the same Caputi, sung every year by thousands of religious observants. In the St. Uberto’s Church at the “Reggia di Venaria”, he recorded a splendid album executing Bach’s concert for one, two, three harpsichords and orchestra. At the St. Rita’s Sanctuary, in addition to carryout his activity as an organist, which he fulfills in solitude, he has played more than 18000 masses, he founded and directs the “Corale Santa Rita”, with which he regularly holds concerts with eclectic programs whose repertoire ranges from ancient music to contemporary music, receiving favorable consents from the public and critics.

With the “Corale Santa Rita” and as director, Omar Caputi has recorded a first world wide album including music for choir and organ by Massimo Nosetti. With over eighty videos, Caputi is among the very few Italian organists to regularly publish live videos on Youtube. For the past nine years he has been the creator and artistic director in collaboration with professor Ugo Piovano of spiritual concert reviews at the “Collegio degli Artigianelli” in Turin, entitled "Baroque and non-Baroque resonances" that has hosted in recent years numerous participants and especially young students. This music festival differs territorially as it is one of the rare cases in which students and teachers perform together. Also at the Collegio degli Artigianelli Omar Caputi together with D. Barni, D. Francescon, D. Tiberino have participated in the restoration of the organ which had remained silent for twenty years.

REVIEWS - Full-blooded musician, Omar Caputi is not only a solid interpreter, but also a refined transcriber and a prolific composer, with a particular vocation for Baroque music (Piccolo Auditorium Paradisi, Torino, Italy) Omar Caputi has been able to arouse enthusiasm of the public the atmosphere was effervescent and there were moments of intense joy and lightheartedness.(Monteu da Po, Italy) The public warmly applauded the performance â€¦.The lovely evening finished with an improvisation, coming straight from the heart and the guts of the artist (Saint-Vincent de Montreux, Switzerland) Dancing dash and virtuoso flavouring the Turin organist Organ Caputi at the Organ Summer (Landsberg, Germany)