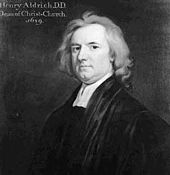 Aldrich was a theologian, historian (co-editor of Clarendon's

) and Vice Chancellor of Oxford University.

Henry Aldrich was born in the City of Westminster, educated in that School, and from thence elected to Christ-Church College, Oxford, in 1662. He was admitted Master of Arts, April 3d, 1669, and became a noted Tutor in his College. He was appointed Canon of Christ-Church, February 15th, 1681, created Doctor in Divinity the 2d of March following, install'd Dean of the said Church June 17th, 1689, and chosen Vice-Chancellor of the University in the Years 1692, 1693, and 1694. He was also Rector of Wem in Salop, was Chaplain in Ordinary to King William and Queen Mary, and Queen Anne; was Prolocutor to the Lower House of Convocation in 1702, and died December 14th, 1710. He was a great Patron and Promoter of Music and its Professors; and though his Musical Studies were to him only as Relaxations from the more useful, in which he principally employ'd himself, yet have they been productive of many valuable Compositions for the Cathedral Service, which in respect to their Reverend Author, and for their real Worth, merit Preservation.

He gave to the University a large and curious Library of Music.