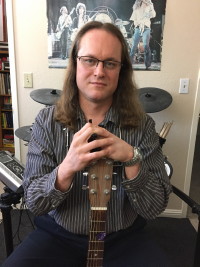 Victor is a musical dilettante, which is a fancy way of saying he doesn't have nearly as much time to spend on music as he would like, and he doesn't really know what he's doing. But his affinity for music is strong, and he's managed to pick up a few things over the years.

Victor cut his teeth on the harmonica while attending U.C. Berkeley as an engineering student (Class of 1991), playing with any street musicians that would let him, and otherwise just listening. In the same time period, he picked up the guitar, learning chords from Beatles fake books and jamming with his roommates. While pursuing a career in software engineering, he joined various community college choirs over the years, and also managed to pick up some rudiments of bass, drums, and keyboards.

But Victor's main focus and best skills are in songwriting and home recording, and he has accumulated an eclectic catalog of original and arranged works in the vein of rock, blues, roots, folk, and other, stranger influences. As an offshoot of that, and due to the love of choral music instilled in him by many enjoyable choir experiences, he does occasionally compose choral arrangements, and is happy to make whatever modest contributions he can to such a wonderful website that supports the sharing of public domain and open-license choral music.