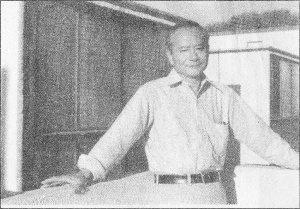 Louis K. Liu was a Chinese composer born in the Hunan Province. In 1947 he graduated from Nanjing National Conservatory of Music, majoring in music theory and composition. He then went to Taiwan and worked as journalist for the Broadcasting Corporation of China. He later worked as chief of the music group of the Central Radio Station and also as the conductor of the Central Radio Choir. His composition works include folk songs and folk art songs such as: "See the Flower, is just like Her", "Blue Bird", "New Year (Kung Hei Fat Choy)". In addition, he also wrote many music critic articles. In 1969 he went to the U.S. and worked for an insurance company in New York City. Over the years he conducted choruses in Chinese communities in New York, Minnesota Twin Cities, and Mountain View, California. After adopting Christianity in 1976, he wrote 11 hymns that were collected in a volume and printed by the Mt. View Chinese Christian Interfaith Church (CCIC) in 2001. In late 1998 Mr. Liu fell ill with Parkinson-like illness and was cared by his wife Dora at home. Mr Liu passed away in his residence at Sunnyvale City, Ca in 2003, at the age of 80.

The works listed below have been made available with expressed written authorization from Mr. Liu's wife. (