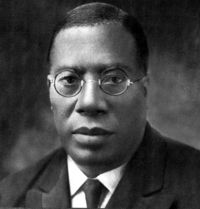 American Methodist minister, gospel music composer and hymn writer. Born to Charles and Esther Miller Tindley; his mother died when he was two, then raised by his father. Largely self-educated, but his knowledge of the Bible and preaching given high praise by many. Joined Phildelphia's Bainbridge Street Methodist Church in 1880, serving as a janitor – but in 1902 assigned to the same church as their pastor. The church moved to a larger site in 1906 and renamed East Calvary Methodist Episcopal Church (now Tindley Temple United Methodist Church

). It grew greatly under his leadership, eventually becoming a multiracial congregation of over 10,000. Tindley wrote over 40 hymns, many still in use today. A few gospel hymns in Tindley's books were composed by his sons, Charles A. Tindley, Jr. and Frederick J. Tindley.

A. Listed by title

B. Listed by first line