Bar 53, tenor part, the second note of the bar should be a quaver, not a crotchet.

Bar 19, tenor part, the last three notes of the bar should be F, Eb, Db in order.

Discussion about the text - "day" or "clay"?

There is an urban myth in several choirs that the penultimate line should read "transforming clay". Ingenious though this correction is (and its ingenuity is no doubt why it has had, and still has, such wide appeal), it is not correct, as a look at Wood's original manuscript of the piece confirms; moreover, it is a misconstrual of the text. Although musically the phrase does appear to start a new clause, it needs to be read in the context of the whole verse; this demonstrates that the sense is "a day of transformation for souls that were formerly unclean". In other words, "transforming" is an adjective, not a participle.

- Well, it might clear it up, except that no self-respecting poet (or even writer of doggerel hymns) would be content to have a word (day) stand as its own rhyme! Charles Wood would not be the first composer to have got a text wrong. The real question is: where is Bramley's MS? —The preceding unsigned comment was added by RMD (talk • contribs) on 16:02, 8 June 2006.

I agree - having 'transforming' as an adjective leaves a dangling adjectival phrase at the end, without a verb to turn it into a legitimate clause, and is totally at odds with the literate character of the rest of the poem. My choir will henceforth sing 'clay', making much more sense. —The preceding unsigned comment was added by Kevin (talk • contribs) on 09:40, 12 July 2006.

I don't think "clay" does make more sense, but would dearly love to see the MS. Note, however, that the attribution is "words adapted by H R Bramley", so who wrote the original? Gibbons also wrote an anthem which (now) has the same title, though it seems doubtful that the words actually date from his time.
I can see why the "clay" reading seems superficially attractive, but "day" makes perfect sense if "transforming" is being used adjectivally i.e. a transforming day to souls which, though previously unclean, are now "pure within" thanks to this transforming activity. If "clay" has been tranformed into souls, then what is the meaning of "erewhile unclean"? The implication is that the souls were previously unclean but, on this reading, they weren't previously souls at all (but rather "clods of dull earth"). —The preceding unsigned comment was added by Weathers (talk • contribs) on 15:11, 13 August 2007.

No, it must be "clay". Clay is not transformed into souls; the souls are the clay, just as in "Disposer Supreme", to "frail earthern vessels, and things of no worth". We are the "earthern vessels", or "clay", that previously were unclean, who by His grace are made pure within. It makes better sense poetically, and biblically too. Interesting discussion! —The preceding unsigned comment was added by Organisten (talk • contribs) on 04:52, 16 May 2008‎.

Perhaps this will bring this discussion to a definitive conclusion: [quoted from English Church Music Volume 1: Anthems and Motets, Ed. Robert King, pub. Oxford University Press, 2010, p. 378] — (Notes on the anthem "O Thou the central orb" by Charles Wood) “Returning to Wood’s manuscript enables the correction of a long-standing error made by the original typesetter, who misread Wood’s handwritten ‘clay’ at b. 60 as ‘day’, and which early proofreaders failed to notice makes little linguistic or rhymed sense. Source: Autograph manuscript, Library of Gonville and Caius College, Cambridge, Wood envelope 19i. Variants: Wood’s slurring of pairs of quavers has been followed in the organ part but, following modern convention, has been standardized in the vocal parts.”Tfstrode (talk) 23:38, 9 May 2016 (UTC)

The MS, as stated above, is in the Library of Gonville and Caius. The word as written by Wood (he gives text under all four voice parts) is very clearly 'day'. As the top paragraph here says, 'transforming' is adjectival, not verbal. I have taken a photograph of the relevant passage: 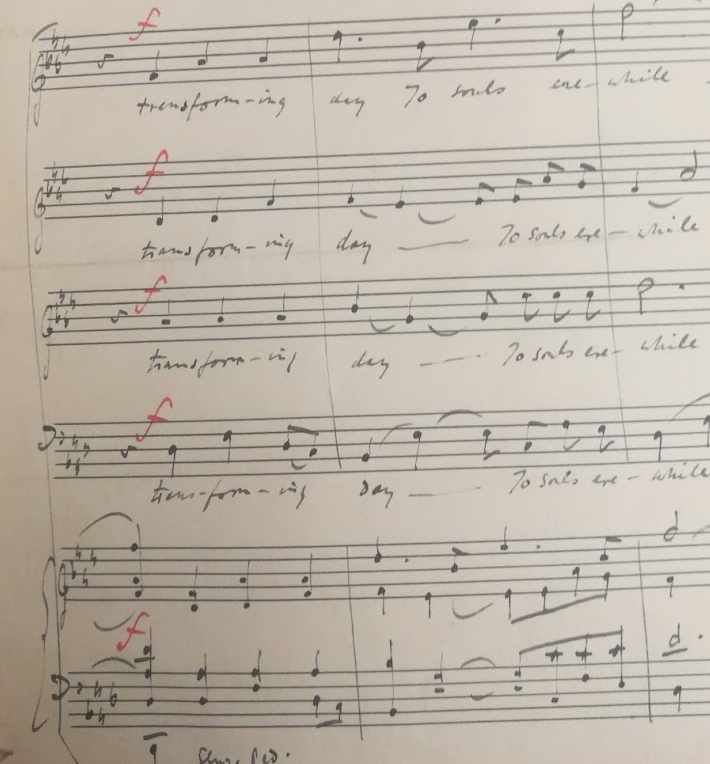 In the 1871 book 'Anthems Used in the Cathedral Church of Durham', Bramley's text (given for Gibbons' setting) has 'transforming ray'. Note though that in R M Benson's original text which Bramley adapted, the previous line is 'eternal ray' Wolsey (talk) 01:51, 10 November 2022 (UTC)

Who wrote the original?

This was indeed Bramley. He adapted his words to the 1619 anthem ‘O all true faithfull hearts’ by Orlando Gibbons. The entry “words adapted by” from this score, has started a life of its own because of indiscriminate copying. Wood in turn adapted his anthem to the Bramley’s hymn, but in a deviating version that is freed from the inferior metre imposed on it by the original text of the Gibbons anthem. This original text, with all its differences from the Wood version is published on this very website. It has no “clay” in it. So, unless a contradicting source emerges with greater authority, all arguments in favour of a copying error must be considered invalid: this hymn is featuring a word standing as its own rhyme. KA —The preceding unsigned comment was added by Klaas (talk • contribs) on 11:46, 7 November 2008‎.

Why introduce the idea of clay?

The whole poem is about light, and it seems odd to introduce the theological concept of souls (or whatever) being 'clay' right at the end of the text. Also, why would this clay be transformed into souls? Surely in a dual system the clay is the mortal body and the souls is the immortal, er, soul? —The preceding unsigned comment was added by Cardinal 1962 (talk • contribs) on 16:00, 25 November 2012‎.