Editor: Jonathan Goodliffe (submitted 2007-11-07).   Score information: A4, 47 pages, 257 kB   Copyright: CPDL
Edition notes: In Bar 100 the violin part has B natural, whereas Soprano 1 and 2, Bass 1 and the continuo have B flat. The latter seems more likely to be the correct reading. All accidentals inserted in the voice parts have been retained, even where this is at variance with modern notation convention. 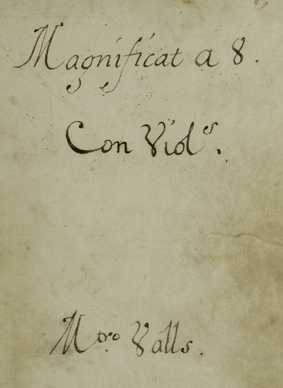 Language: Latin
Instruments: 2 violins in unison, continuo and organ. Organ part may have been added by someone other than the composer.


Description: In the title inscription on the manuscript of this work the words “Con Viol[in]es.” may have been added (albeit in the same handwriting) at a later date than the primary inscription “Magnificat a 8.”

The two identical violin parts seem to be in a different handwriting (ii) from the voice parts. They may perhaps have been added at a later date.

The continuo accompaniment may be by a third hand (iii). There are two identical copies of this, suggesting that at least two instruments should constitute the continuo. The Organ accompaniment seems to be in a fourth handwriting (iv).

The value of the notes in Gloria section has been halved.

The work is followed, in the same manuscript and in handwriting (iv), by an Anonymous Requiem for soprano and alto with accompaniment by two distinct violin parts. For stylistic reasons this work seems unlikely to be by Valls and may have been added at a later date. It suggests that the organ accompaniment to the Magnificat may not have been by Valls either.

The manuscript seems quite worn (apparently from frequent use). A few small sections of it have become illegible. Where this is the case notes have been filled in in handwriting (iv) as has the setting of voice parts where they have not been fully set by the composer.

Original text and translations may be found at Magnificat.