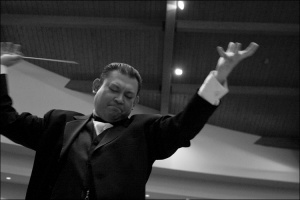 Born and raised in the Republic of the Philippines, he came to Canada in 1988. He studied music at York University and received his Bachelor of Fine Arts in 1998 and Master of Arts degree in composition in 2001. Among his composition teachers include the late avant garde-ist James Tenney and saxophonist/martial arts instructor David Mott. Both mentors were a major influence in his composition process. Tenney instilled a love of musical acoustics, mathematics, and musical form and perception [as demonstrated Tenney’s META/HODOS: A Phenomenology of 20th-Century Musical Materials and an Approach to the Study of Form (1961; Frog Peak, 1988)] while Mott ingrained the value of emotionality, musical sincerity, and the Zen approach. His Master’s thesis, entitled “Approaches to Counterpoint,” examines the contrapuntal procedures found in his compositions and in works found in Twentieth Century repertoire.

As a conductor he has directed groups and artists such as the Nova Amadeus Chamber Orchestra di Roma and soprano Maria Pellegrini. In 2002, he (along with Daniele Colla) founded the Esprit Alliance Orchestra and the Vaughan Chamber Players (2003) where he currently serving as music director/conductor.

His music has been performed by artists such as Measha Brueggergosman and groups such as the Continuum Ensemble, York University Wind Symphony, the Esprit Alliance Orchestra, the Vaughan Chamber Players, Coro San Marco, the Volga Band (Saratov, Russia), the Silverthorn Symphonic Winds, and the Northdale Concert Band where he currently functions as principal flute.

Please note that the contributor of this page is also the composer and copyright owner/holder of the works listed. If you have any questions about any of the works below, please feel free to contact the composer through his website (http://derkapellmeister.tripod.com).

As well, if you are performing any of the works below, I would greatly appreciate a copy of the concert program (in PDF format) emailed through my website.

Thank you for your interest.