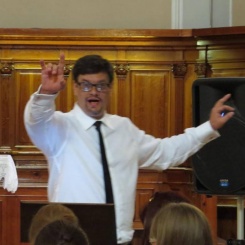 In 1987 he founded the Children's Choir of UEPG and in 1999 organized the choirs Ars Musica and Vox Pop with which it performed numerous concerts, mainly promoting vocal repertoire of Brazilian music.

Was the originator of draft disclosure of vocal music and choral singing: The implementation of a system through choral music education in public schools in Ponta Grossa, forming 83 choirs, directly reaching 40 regents, 1346 students from public schools in Ponta Grossa and, indirectly, more than 200,000 people. Lectured and presented concerts in all the capitals of Brazil and served as conductor of Choir Ars Musica, sponsored by the Ministry of Culture of Brazil, Cultural Train that traveled 102 Brazilian cities.

Composes a free language, supported many times in popular music traditions. Since the early 2000s the composer has been dedicated to the production of contemporary avant-garde music for choir, work for which has been recognized in the international art world. Has a total of six CDs and two awards for artistic merit, the Prize Anita Philipovsky delivered by the city of Ponta Grossa, and the prize The Sower awarded by the Government of the State of Paraná/BRA.