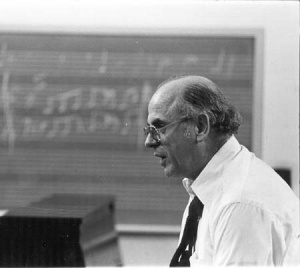 Edwin R. Fissinger was born June 15, 1920 and attended school at Rockford, Illinois. He earned an undergraduate degree at Marquette University, Milwaukee. He served during World War II in the U.S. Air Force. He received both his bachelor's and master's degrees from the American Conservatory of Music in Chicago. While there he specialized in composition and studied under Leo Sowerby. He earned his doctorate from the University of Illinois in 1965, where, in addition to studies in music literature and conducting, he studied musicology with Dragon Plamenac.

Dr. Fissinger's musical career began at the American Conservatory of Music where he was director of the choir and instructor from 1947 to 1954. He then was a graduate assistant in music theory at the University of Illinois from 1954 to 1957. From 1957 until coming to North Dakota State University in 1967 he was chairman of the music department and director of the choir and madrigal singers at the University of Illinois at Chicago Circle.

Fissinger was nationally recognized as a composer and editor of choral music, with numerous works published. In addition to orchestral, piano, and vocal compositions, he wrote 183 choral works, a substantial contribution of quality literature to this medium. He was editor for a number of years, beginning in 1967, of the Parkway Choral Series of contemporary choral music for World Library Publications. A number of his choral works have been published by this company. From 1958 to 1962 he was consulting editor for Summy-Birchard Publishing Co. In 1973, 1977 and 1983 the NDSU Concert Choir, under his direction, was selected to perform at the opening session of the National Convention of the American Choral Directors Association. In 1977 Dr. Fissinger received the NDSU Blue Key Doctor of Service award. He retired in 1985 and continued composing until his death in Fargo on October 16, 1990.

Fissinger and Cecile Patricia Monette were married Feb. 27, 1943 in Fresno, California. Cecile was born in Lowell, Massachusetts on July 26, 1917. They raised a son and daughter, Edwin and Laura. Cecile died in 1998. They are buried at Riverside Cemetery, Fargo.

The choral music of Edwin Fissinger exhibits individuality, a signature that is readily recognizable by those who are familiar with his works. One only need reflect upon the individual qualities of the music to understand his important contribution to the enhancement of the choral art.