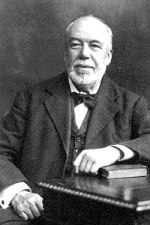 Mann graduated from New College, Oxford (MusB 1874, MusD 1882). He was a chorister and assistant organist at Norwich Cathedral, and after short stints playing the organ at St. Peter’s Collegiate Church, Wolverhampton (1870); St. Michael's parish church, Tettenhall (1871); and Beverley Minster (1875); he became the organist at King’s College Chapel, Cambridge (1876-1929), University Organist (1897-1929), and music master and organist at The Leys School, Cambridge (1894-1922). In addition to composing an oratorio and a number of hymn tunes, he was music editor of The Church of England Hymnal (1894). [Source: Cyberhymnal, slightly adapted. There seems to be very little information available on A. H. Mann on the web, which is somewhat surprising as he was a relatively important church musician in England in the late 19th cent.]