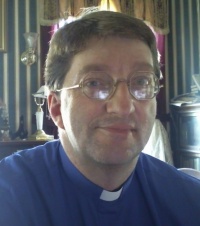 Before moving to Ohio, he had lived his entire life in Key West, Florida, where his father was the minister of a small Bahamian Presbyterian congregation. His mother was native Dutch, born in 's-Gravenhage (The Hague), Netherlands. He was confirmed as an Episcopalian at St. Paul's Church in Key West and served there in numerous capacities, including cantor and sub-organist. Concurrently, he served as Minister of Music at St. Peter's Episcopal Church (Key West), a small Bahamian Anglo-Catholic parish. He is Bishop of the Diocese of the West of the Progressive Episcopal Church.


Bishop Weed is the composer of over 130 hymn tunes, mostly in the traditional English style. In addition, he has composed an English language Missa Brevis for St. Paul's Church in Key West, and he has completed a Latin Missa Solemnis for general use in Roman and Anglo-Catholic parishes. Compositions also include shape note (Sacred Harp) hymns, and hymns in the English "West Gallery" style. A number of hymn descants and Anglican chants are also available.

Some additional music is available for purchase at Sheet Music Plus [1].

He shares his home with two pianos, a Well-tempered pipe organ, and four cats. Some of the cats occasionally strive for musicianship by creating aleatoric music on a piano if the key cover is accidentally left open.

A brief note to clarify any copyright questions: While I do retain a personal copyright for all my compositions, they may be freely copied, distributed, performed, and recorded, but may not be sold. I wrote the music to be sung and enjoyed. Soli Deo Gloria!

This page includes separate sections for hymns by living authors, Michael Morgan, Michael Hudson, and Christopher L. Webber. The hymn-writers have given their kind permission for me to list settings of their hymns here on my CPDL page. These hymns may be freely used with the following stipulations: 1) the © information is included on all copies, and 2) the editions may not be sold.

For any questions regarding publication of any hymns or other music published here, the composer may be contacted via email at vicar@stlukepec.org.

This is a separate collection of hymn settings using the texts of hymn-writer Michael Hudson. Both composer and author grant free use of these arrangements. They may be freely printed, copied, and shared. Texts are taken from "Songs for the Cycle" published by Church Publishing Inc. (ISBN 0-89869-419-1) All texts are © 2004 Michael Hudson and are used here with his permission. Both author and composer grant free use of these hymns.

Each hymn is a meditation on a particular text of the liturgical year according to the Revised Common Lectionary (RCL). Each hymn's PDF includes the Sunday, Lectionary Year, and Scripture source.

The number preceding each entry is the Sunday number of that particular liturgical season.

This is a separate collection of hymns and Psalms with texts by American hymn writer Christopher L. Webber. His Psalter texts are published in A New Metrical Psalter: Revised Common Lectionary Edition, Church Publishing Incorporated, 2008. Hymn texts are from an as-yet (2016) unpublished collection. All texts are used here with the author's permission, and the settings may be freely downloaded and used for congregational worship, ensuring that the proper copyright permission is included.