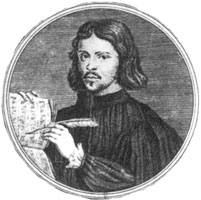 Thomas Tallis was Organist of the Royal Chapels to King Henry VIII, King Edward VI, Queen Mary, and Queen Elizabeth. He was esteem'd a most excellent Composer of Church Music, at least equal to any Contemporary, either of his own Country or of Foreign Nations; and was the first who compos'd the Musical Part of our Divine Service in the English Language. He, in conjunction with William Bird, a Musician of great Eminence, who had been his Scholar, obtain'd of Queen Elizabeth, in the Year of our Lord 1575, Letters Patent, by which they claim'd the exclusive Right of printing all Ruled Paper, as well as of all Music Books, for the Term of 21 Years. He died November 23d, 1585, and was buried at Greenwich in Kent. (Greenwich is, in fact, in Greater London.)

Enterred here doth ly a worthy wyght, / Who for long Tyme in musick bore the bell:
His name to shew, was Thomas Tallis hyght,  / In honest vertuous Lyff he dyd excell.
He ser'd long Tyme in Chappel with grete Prayse, / Fower Sovereygnes Reygnes (a thing not often seen)
I mean King Henry & Prynce Edward's dayes,  / Queen Mary, & Elizabeth our Quene.
He maryd was, though children had he none, / and lyv'd in Love full thre and thirty yeres
With loyal spouse, whose name yclyipt was Jone, / Who here entomb'd, his Company now bears.
As he did lyve, so also did he dy,  / In mild & quyet sort (O! happy man)
To God ful oft for mercy did he cry, / Wherefore he lyves, let Death do what he can.

NOTE. This page has been (mostly) automated. Please check if your new work has been automatically added below, then delete "Recent Additions".

Many are from period sources, including Latin and pre-1650 English texts (not necessarily translations) set to preexisting music. See also Nine Compositions for Archbishop_Parker's Psalter, below.

Choral works not indexed on CPDL