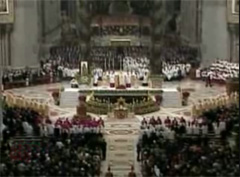 The Mass of the Western Church takes its name from the Latin words spoken at the end of the ceremony:

From the first millennium of the Common Era various texts from the Mass have been sung, first as plainchant (including Gregorian chant, Ambrosian chant, Mozarabic, and so on) and, beginning with the motets of Magister Leoninus and Perotinus, increasingly as homophonic or polyphonic music.

Machaut's Messe de Notre Dame is the first attributed work to include all the texts of the Ordinary of the Mass, that is those used at all services as opposed to the Propers or items specific to the particular ceremony. Such cyclic masses (a lower case m distinguishes musical settings from the ceremony itself) became a major genre during the Renaissance. A smaller number of plenary masses or propriae missae set both Ordinary and Propers for a given Mass, and Isaac's Choralis Constantinus was an ambitious project to set every item of the Propers.

After the reformation "Mass" was at first used by Lutherans but now the Book of Common Prayer term Communion Service is widespread.

Ordinary of the Mass

The Ordinary is usually understood to consist of the first five of the following texts, of which the Kyrie, introduced to the west by Pope Sergius in the 8c., is in Greek rather than Latin:

The first entire cyclic mass setting by a single composer, Guillaume de Machaut's Messe de Notre Dame, includes all six movements listed above. Since the time of Machaut the vast majority of mass settings omit Ite missa est (the Missa brevis of Zoltán Kodály is a notable exception). Concluding with Domine salvum fac regem (ecclesiam, etc.) nostrum (Lord, save our King/Church…) has occasionally been sanctioned, and the Mass of the Dead ends not with a dismissal but with chants to accompany the procession to the burial place.

The division of the text occasionally differs from the numbering above. The penitential text of the Kyrie invokes the Father (Kyrie), then the Son (Christe), and then God the Father again, but each petition is traditionally repeated three times. Kyries in 4 or 5 movements (such as Machaut's or the Missa in Tempore Paschali of Nicolas Gombert) presume an alternatim performance, in which plainchant or organ alternates with polyphony to preserve the 9-fold repetition. Gloria and Credo may also be treated in alternatim style, or else set complete but divided at various points into separate 'paragraphs'. Sanctus and Benedictus may be set continuously or separately; each finish with the exclamation Hosanna in excelsis! and the rubric "hosanna ut supra" ("Hosanna as above") instructs the singer to return to the music following the Sanctus for the final Hosanna. The threefold Agnus Dei may be set in one, two, or three separate movements, the final "dona nobis pacem." having the same number of syllables as "miserere nobis".

Mass cycles in 15th and 16th century England often omitted the Kyrie, whose place was taken by a Troped Kyrie proper to the feast. In the Church of England after the reformation, the name "Kyrie" was given instead to responses to the commandments: after the first nine commandments was to be sung [or said], "Lord, have mercy upon us, and incline our hearts to keep this law"; after the ninth was sung [or said] "Lord have mercy upon us, and write all these thy laws in our hearts, we beseech thee." English usage after the reformation also moved the "Gloria in excelsis" to the position of a Postcommunion canticle, and provided for the "Sanctus" but no "Benedictus", and omitted the "Agnus Dei".

The term Missa brevis is used in numerous ways. It may be simply a 'hunter's Mass' or speedy setting of the whole Ordinary, a setting omitting the Credo, a Missa ferialis or weekday mass omitting the Gloria, or (particularly in Lutheran usage) either a Kyrie-Gloria or a Sanctus-Agnus pair.

Proper of the Mass

Interspersed in the ceremony of the Mass are the texts that change daily, known as the Propers. The Major Propers are 3 collects of the day (following the Gloria, the prayer over the gifts, and communion), and the readings. The Minor Propers include the the benediction and preface as well as the following antiphons sung by the choir:

Introitus: the Introit is sung as the procession of clergy enter the church at the start of the Mass. The Kyrie and Gloria follow on, and then (on Sundays and solemnities) two lessons, the first usually from the Old Testament (or the Acts of the Apostles during Eastertide) and the second, the Epistle, from the New Testament.

Graduale: The Gradual is in responsory rather than antiphon form, and hence occasionally called the Responsorium. In the 1970 Ordinary Form it may be replaced with a Responsorial Psalm (which otherwise is sung or recited between the First Lesson and the Epistle). It is sung after the Epistle as the Gospel book is taken to the centre of the church, followed by the

Gospel acclamation, usually an Alleluia verse but a tractus during Lent, sung as the book is incensed. On important feasts this is followed by the

Sequentia (or Prosa): Of over a thousand sequences in use before the Council of Trent, only 4 were retained in the 1570 missal: "Victimæ Paschali" at Easter; "Veni Sancte Spiritus" at Pentecost; "Lauda Sion", for Corpus Christi; and the "Dies Iræ" during the Mass of the Dead (Requiem); "Stabat mater dolorosa" was restored in 1727. In 1970 the Second Vatican Council eliminated Dies irae and made all but the first two optional; the sequence's position was also moved in front of the Gospel Acclamation.

Offertorium: after Credo and intercessions, the Offertory is sung as the elements of bread and wine are brought to the altar, leading to the prayer of consecration known as the Canon, sung by the priest(s) (con-)celebrating the Mass, which incorporates the Sanctus and Benedictus. The celebrant then re-enacts the last supper, reciting the words with which Christ shared the bread and wine with the apostles, leading to the Agnus Dei.

Communio: the Communion text is then sung as the bread and wine are shared amongst the congregation. After the communion is finished and closing prayers concluded, the Ite missa est concludes the Mass.

The Vatican II reforms added a third Old Testament lesson to the Epistle and Gospel, separating the Gradual from the Alleluia. Nowadays the Latin Gradual is usually replaced by the Responsorial Psalm, a sort of 'fourth lesson'.

Other items associated with the Mass

Besides the Ordinary and the Proper, other texts associated with the Mass occasionally received musical settings. These include the blessing of water before Mass and sprinkling of it upon the congregation, accompanied by an antiphon Asperges me (or during Eastertide Vidi aquam). The opening Rite of Confession includes the prayer called the Confiteor immediately before Kyrie; the "Confiteor" has been occasionally set to music, for a choir.

Some Masses on special days call for extra proper items. These include antiphons for the Procession with Palms on Palm Sunday for which Palestrina, Victoria and Schubert provided choral settings, and from which "Hosanna to the Son of David derives. Another day with extra antiphons is Maundy Thursday, where the washing of feet is accompanied by singing.

The Choral Public Domain Library has editions of upwards of 400 masses, either complete settings or mass sections, which are listed in the Mass category, including works by the following composers:

The numbering (and in most cases the grouping together of movements) of the Gregorian chant masses originated in the late 19c; their titles reflect the Troped Kyries once associated with them.

CPDL also has a number of masses set in the vernacular language of various countries: see Category:Vernacular Masses.