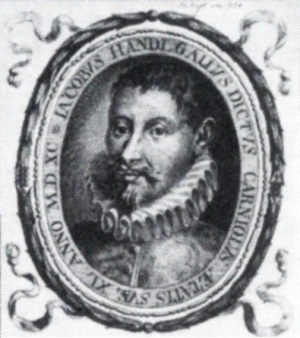 Jacobus Handl Gallus, a portrait from 1590

"Gallus" redirects here. You may be looking for Antonius Gallus. See also the disambiguation page for Gallus.

Jacob Handl (as he is known from archival material) or Jacobus Gallus (as his title pages proclaim) was born in 1550 in Corniola (now Ribnica), part of present-day Slovenia. Both German Handl and Latin gallus mean "rooster" and it is presumed the original must have been the Slovenian name Jakob Petelin. He is best known for his sacred music. A Cistercian monk, Gallus travelled in Bohemia, Moravia, and Silesia, and went to Melk Abbey

, in Lower Austria. He was a member of the Viennese court chapel in 1574, and was choirmaster to the bishop of Olomouc, Moravia

He used the Latin form of his name, to which he often added the adjective Carniolus, thus giving credit to his home land, Carniola. His most notable work is the six part Opus musicum, 1577, a collection of motets that would eventually cover the liturgical needs of the entire ecclesiastical year. The motet O magnum mysterium comes from the first volume (printed in 1586) which covers the period from the first Sunday of Advent to the Septuagesima. This motet for 8 voices shows evidence of influence by the Venetian polychoral style, with its use of the coro spezzato technique.

His wide-ranging, eclectic style blended archaism and modernity. He rarely used the cantus firmus technique, preferring the then-new Venetian polychoral manner, yet he was equally conversant with earlier imitative techniques. Some of his chromatic transitions foreshadowed the breakup of modality; his five-voice motet Mirabile mysterium contains chromaticism worthy of Don Carlo Gesualdo. He enjoyed word painting in the style of the madrigal, yet he could write the simple Ecce quomodo moritur justus later used by George Frideric Handel in his funeral anthem The ways of Zion do mourn. Gallus died on July 18, 1591 in Prague.